skip to main | skip to sidebar

A selection of movies to be watched over Halloween.

I love Halloween. I think it's great. The atmosphere, the imagery and most importantly the movies. I love a good horror movie and I love anything with a bit of spooky charm. That's just me. So with this love of Halloween I thought I'd put together a list of ten movies that I'd like to watch over Halloween and therefore I think you should watch too. Why ten? Ten seems like a good number, wouldn't you agree? Good, I thought as much!

I should point out that these are merely the ones that do it for me. I am in no way claiming these are the best horror films that can be watched in the world. These just have special meaning for me for various reasons. So deal with it.

These are in no particular order really. Didn't really feel like doing a typical countdown or what have you. Ok so here we go: 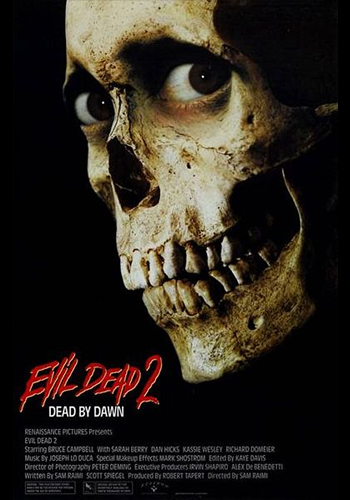 For years when someone asked the slightly dumb but oh-so-common question "what's your favourite movie of all time?" I answered "Evil Dead 2." Not that it really is or even ever was my favourite movie of all time (I mean, do I even have one?) but because it deserved to be and I felt it defined my taste in a good way. Obviously now I don't say that I just punch them in the face but I still love Evil Dead 2. It's a special kind of movie. From Sam Raimi, now massively famous for directing Spider-Man, Spider-Man 2 and some sort of filthy awful film that I don't know the name of, Evil Dead 2 takes the extreme gore and horror of its predecessor and turns it up to comic levels. Think 3 Stooges with geysers of pus. Added to that, the lead character Ash replacing his severed hand with a chainsaw. What's not to like? Watch it.
Halloween III: Season of the Witch
Directed by Tommy Lee Wallace - 1982 - IMDB 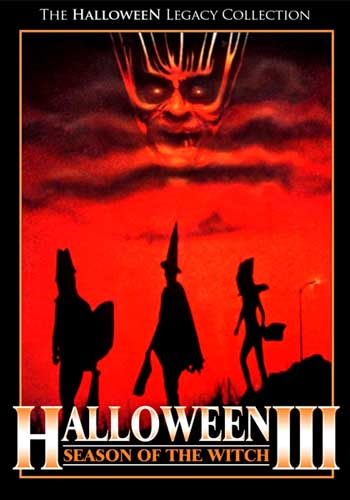 "Buh?!" I hear you say! "Really!?" you pipe up again. The answer is yes. Really. This is the film from the Halloween series that I choose. Why? Why?! Because it's brilliant that's why. Ok no, obviously it's not brilliant. It's shit. But I still love it. No film has made me sit in such utter confusion while still being able to follow the plot and action. This movie is insane to the point of insanity. Yes, that doesn't make sense... and neither does Halloween III. For those not in the know, Halloween III is the only film in the Halloween franchise to not feature the unkillable, Shatner-faced, stabbing enthusiast known as Michael Myers. When the original Halloween was made, there was no intention of a follow-up but once the sequels starting rolling in they decided to end the original thread with part 2, then turn the films into an anthology series, giving a different story to every movie. The title "Halloween" being vague enough for this. It didn't work out because people wanted Michael Myers back (and because Halloween III was terrible) so they made up some ridiculous crap and he came back to life in part 4 somehow. Either way, Halloween III is a rubbishy delight. I'm not sure what does it for me exactly. The tv ad jingle, the snakes coming out of kids heads (somehow?) or the mispronunciation of Samhain as "SAM-HAYNE". It's just great. Watch it.
Day of the Dead
Directed by George A. Romero - 1985 - IMDB 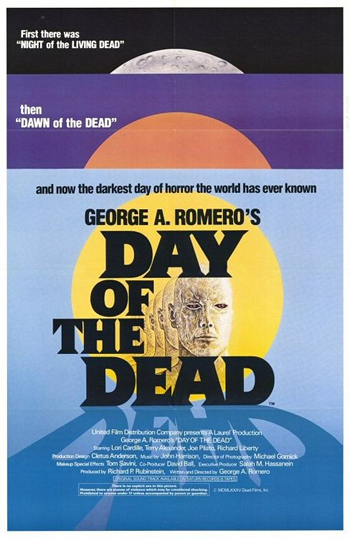 The third in Romero's classic dead trilogy. Of course he now has six of them, but most people don't count the last 3. I especially don't count Survival of the Dead... yeesh. That was bad. As well as Romero's own, the remake (albeit in name alone) of Day of the Dead should be avoided at all costs. Either way, this is definitely my favourite of them all. Basic story; a small group of scientists and soldiers are holed up in an underground bunker very far along the timeline of a zombie outbreak. Conflict arises between the now insane military Colonel's attempts to control everyone while the head scientist insists on perfmorming bizarre experiments on the living dead. The atmosphere and tension build to a spectacular level. I was lucky enough to see a screening of this last year around Halloween introduced and followed by a Q & A by Joe Pilato who played the infamous colonel. This was a lot of fun. This movie is super great. Watch it.
Braindead
Directed by Peter Jackson - 1992 - IMDB 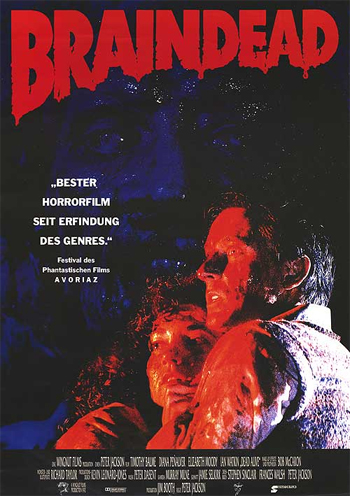 What do you think when you hear the name Peter Jackson? If you think of dwarves and elves rather than zombie sex and kung fu priests then you've got the wrong frame of reference. This is Peter Jackson's second movie and there is no doubt in my mind that it is his best. Unbelievable splatter comedy gore. Everything that can be squirted, splashed and drenched is squirted splashed and drenched in this film including a long sequence involving a lawnmower and an entire house full of zombies that delivers the giggles better than any other film I can think of. It also contains some of the best one-liners in cinematic history: "She's... experienced" "I kick arse for the Lord!" "Some of my best friends are pedophiles!" "Party's over!" Also notable that this is the first movie on my list that isn't a sequel. Watch it.
The Texas Chain Saw Massacre
Directed by Tobe Hooper - 1974 - IMDB 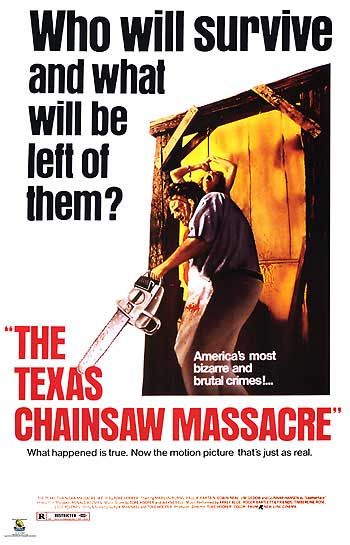 Last year I attended a screening of The Texas Chain Saw Massacre as the second part of a double bill. The first was John Carpenter's Halloween. We were surrounded by awful 'young folk' who didn't seem to understand that it's polite to remain quiet and respectful in a cinema. They talked and giggled their way through Halloween which I can understand to a degree. If one isn't versed in horror history Halloween may seem like a shaky example of a standard slasher formula flick. They probably didn't realise that such a thing didn't exist when it was first produced. However, when The Texas Chainsaw Massacre came on things changed. Clearly this lot expected more of the same from the second movie. They had a clear "oh wow can you believe this used to scare people, what a bunch of knobs" attitude about them that got quickly blasted away at the first appearance of Leatherface. After that they were quiet, by golly. It was clear that the ripping, intense experience that is The Texas Chainsaw Massacre was a touch more than they expected. Hilarious. Watch it.
The Blair Witch Project
Directed by Daniel Myrick & Eduardo Sánchez - 1999 - IMDB 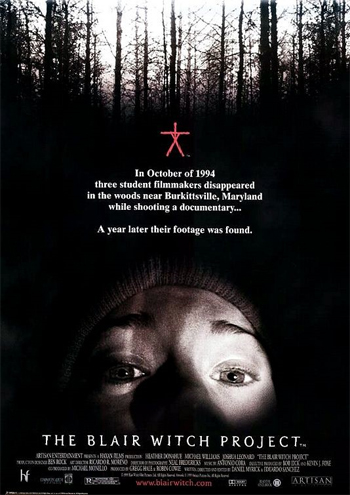 The Blair Witch Project is fucking scary. Don't let anyone tell you otherwise. If you aren't scared by The Blair Witch Project then you're either an asshole or you're the actual Blair Witch... and in that case you don't exist... I hope. Seriously though, the ballsiness of this movie is unfathomable. Sure it wasn't the first horror film to use the found footage angle (or the last) but it's certainly one of the most inventive. It takes talent to use your limitations and flaws to your benefit especially to the level of this film. Can't afford a monster? Don't show the monster. Can't afford crazy special effects? Make the killings enigmatic. Cast is kind of annoying? Use that to amp up the tension. The simplicity of filmmaking here is unreal. I watch this and quiver in fear at a bit of shirt... and a rock. Oh, and some sticks! OH NO!! STICKS!! Seriously. Fucking terrifying. He's standing in the corner! THAT'S THE SCARIEST THING I HAVE EVER SEEN! Fuck. Watch it.
Beetle Juice
Directed by Tim Burton - 1988 - IMDB 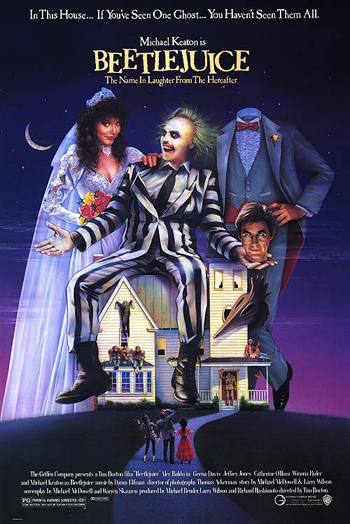 What can I say about Beetle Juice? Really? This is arguably Tim Burton's best film for many reasons. It gets the best out of his German expressionist riffing and uses his rambling storytelling to its advantage. Most of his films tend to suffer by becoming baggy by his pacing and plotting or by feeling over-designed. Sometimes both... but Beetle Juice works. I watched this a lot when I was a kid. Like... a lot! I know it back to front at this stage but it still keeps me entertained. Michael Keaton is absolutely magnetic and it features one of my favourite opening credits sequences in cinema. Yesterday I was in a costume shop picking up some stuff for halloween and they had what appeared to be a spooky music playlist. The opening music from Beetle Juice came on and I felt at home. Brilliant. Watch it. 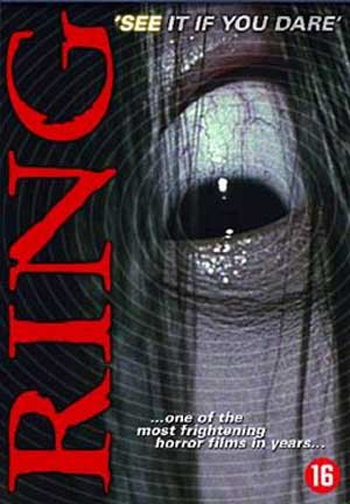 Good god this movie is terrifying. I have to admit that I saw the inferior American remake before I saw this so unfortunately didn't find the story queues as scary as I should have. Barely matters though. The tone and atmosphere of this thing are unparalleled. I first watched it on broadcast television as part of a string of horror films being aired leading up to Halloween. My dad told me he also flicked on to it briefly and while the few moments he saw was merely people talking in a newspaper office, he found the atmosphere very unsettling. It's hard to have a film be that effective. It's great. Watch it.
The Mist
Directed by Frank Darabont - 2007 - IMDB 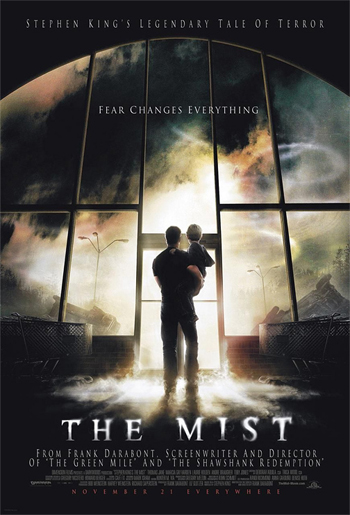 I remember when this came out. I had seen the poster but for one reason or amother hadn't clocked it. Then a morning radio film review show mentioned it being rather excellent. I was intrigued. I bought me a ticket and got blown away. I have a very vivid memory of walking out of the screening room with a disturbed look on my face. The people waiting for the next screening saw me and seemed excited. This movie is exactly what horror should be. Simple, effective and strong. The real monsters are of course the humans. Yes, violent creatures in thick mist are spooky, but a psychotic preacher leading a mob to murder is something that could happen down the road. This is scarier. When I heard that Frank Darabont was leading the team adapting Robert Kirkman's Walking Dead comic book series for the TV I knew it would be great because I'd seen The Mist. It's a good film. Watch it.
The Fly
Directed by David Cronenberg - 1985 - IMDB 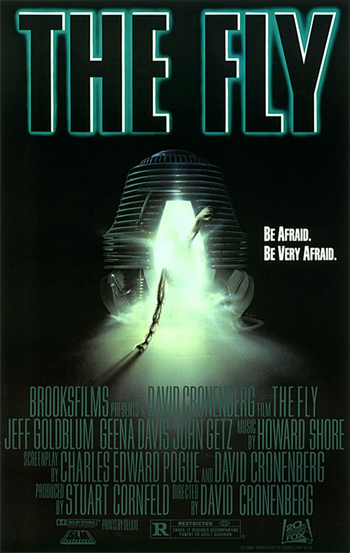 Oh man. This movie. Right? Oh you haven't seen it? Ok. Well you should. It's really good. Cronenberg's body horror is epitomised in this film. There are two things The Fly will shoot down for you. The first is the idea that Jeff Goldblum is something of an idiosyncratic comedy actor. He is incredible in this movie. Very moving. The second is that horror is a genre that is unemotional or campy or silly. This is a hard hitting dramatic film with strong themes of disease, pregnancy, alienation and humanity. The ending is a gutpunch that will haunt you well after you're finished. Oh and the special effects are cool too. Watch it.
Ok that's me now for Halloween. I hope you have a spooooky one. Yes! Spooooooky! Ghosts n shit! Oooooooooh!